OK....so now I have the printer, have learned some stuff from building the printer and the CNC conversion...those 6 legged roboty things look way cool!..So here I go.

Been looking at a large number of designs, blogs, thingiverse thingies, youtube, forums...you get the point.  So since I'm into doing things the hard way, I will design and build my own hexy...once I have finished the printed cats that her majesty found on thingiverse, and promised her workmates I would print for them.  Cats!!...all this technology, money, combined knowledge and resources...and she wants cats!

Anyhoo...I start with SketchUp (herein referred to as "SU"), and I have been playing with SU for years.  I'm still living on SU pro 8...It's perfect for my needs, so why upgrade?  SU has a massive number of plugins which are really useful for this sort of thing.  Granted, SU is not industrial strength like AutoCAD, AutoDesk, SolidWorks or Truespace (and the many, many others out there), but a powerful beast nonetheless.  Once you add in a few plugins, you start to see exactly how powerful it is.

Once of the first to get is SketchyPhysics.  If you want to do some basic mechanical design, and then test things like movement, clearances, and general aesthetic, then this is a must.  You can add servos, hinges, pistons, sliders and then animate them.

Then you get the STL exporter...kind of goes without saying what this is for, but for the readers that are new to this 3D thing, it's the 3D model format used to create the code used by 3D printers.

There's a couple of others that I recently added since building the printer.  Shape Bender and DrawHelix combo is awesome for creating nuts and bolts.  The standard followme tool in SU doesn't work that well to create the bolt threads, or even a nice smooth helix, but ShapeBender and DrawHelix are the schizzle at it.

One more...CurviLoft.  This is one I recently started using, and for organic shapes, you can't go past it.  This would be an interesting one to try with a laserline scan of something like a face, and then use the loft tool to create a surface over the profiles.  Hmm...that sounds like a project :-) 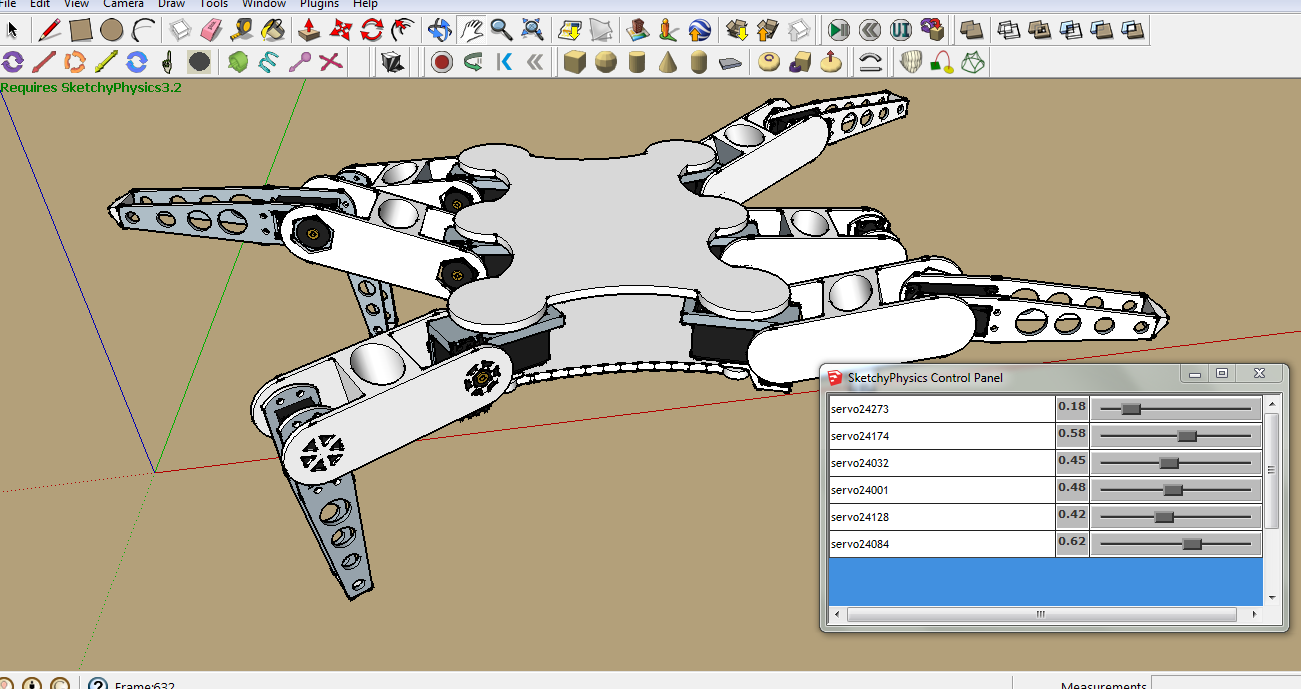 So the grand plan involves using an Arduino board (Uno, possibly Mega), some sort of servo controller chip like the JP Serial Servo chip (24ch), MG996R servos and a whole bunch of freshly printed parts.


Here's the basic concept, with some motion added to check the actions..

Of course, best laid plans and all....The legs went through a bit of a redesign because I could see there would be problems printing those shapes, and print them in a way that maintained a high degree of structural inegrity.  Trying to screw in a self tapping screw through the side of a printed item is no good..it just delaminates the plastic.  There's also the issue of assembly.  Very easy to design the impossible-to-assemble shape.

So what I ended up with is a little convoluted, possibly slightly over-engineered, but I reckon it might just work.  I've seen these set up with just struts on the servo horns, everything off to one side, and only pivoting on the servo shaft.  That would be OK for lasercut or CNC milled aluminium parts...but I'm printing mine and I want something a bit more robust...so here it is.

There's 8 parts to each leg, 4 parts are identical, so only 6 different models to deal with.

After some test parts, working out that you have to give items clearance (if you don't then things are such a close fit, you can't fit them!), I settled on the final design for the legs.