So it's been a couple of months since my last post, but it has been time spent planning, buying parts, printing parts and researching an upgrade path for the CNC machine.  The dremel was OK..ish, but anything other than lightweight engraving (with that 'rustic' look) it was hopeless.

I knew it would be a close fit with a 66mm wide gap down from the top platform and a 50mm diameter CNC spindle.  I still wanted to keep the bodywork pretty much intact, so it called for some creative thinking, and I think I've done an OK job :-)

So rather than me waffle on about it, I'll let you see for yourself. 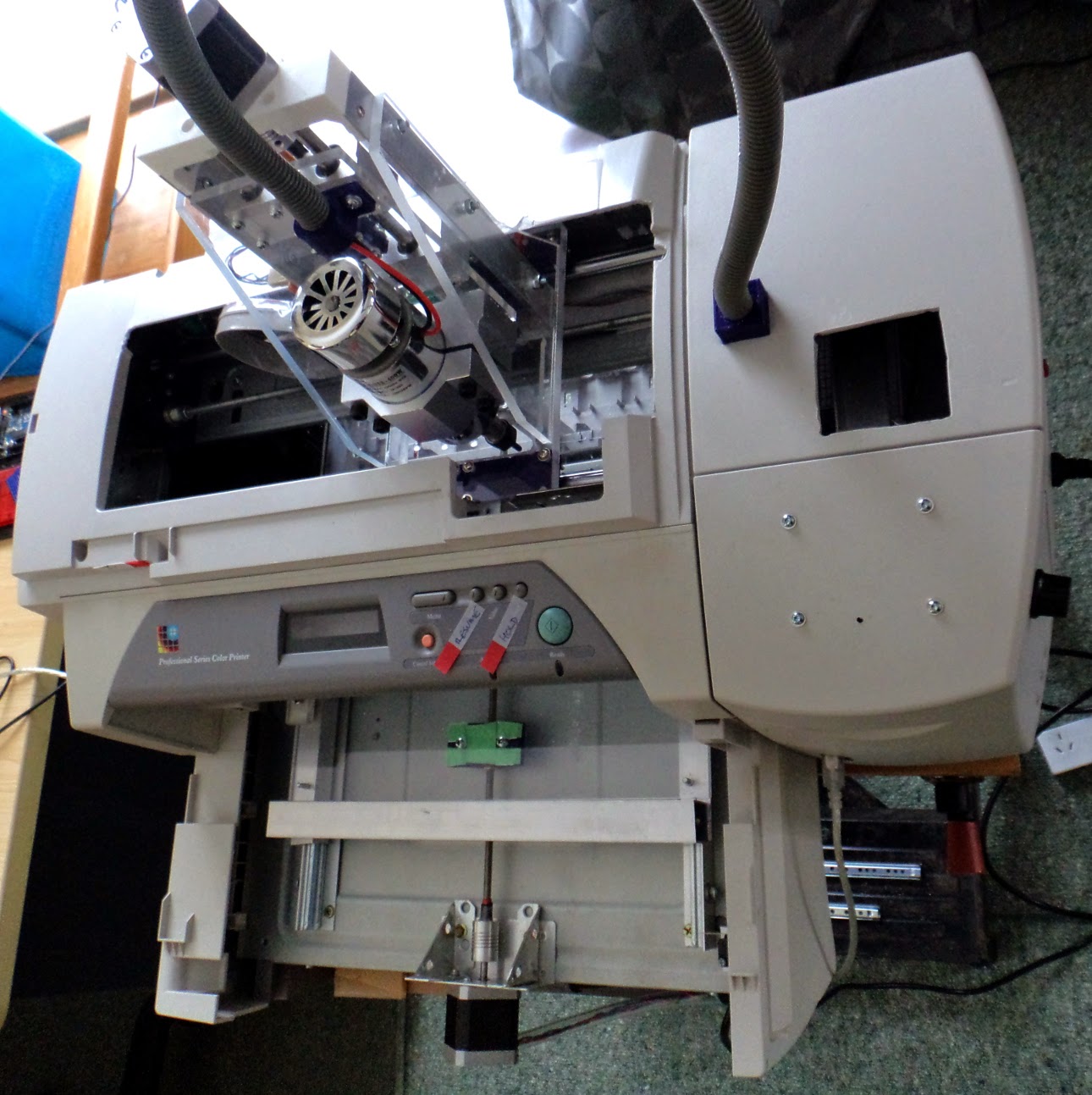 Now some might baulk at my  penchant for using acrylic..a lot...but it's actually a nice material to work with.

I made the base plate with 10mm acrylic, everything else is 6mm.

The top support/stepper motor mount is 3D printed on the Mendel90.  I love my 3D printer :-) 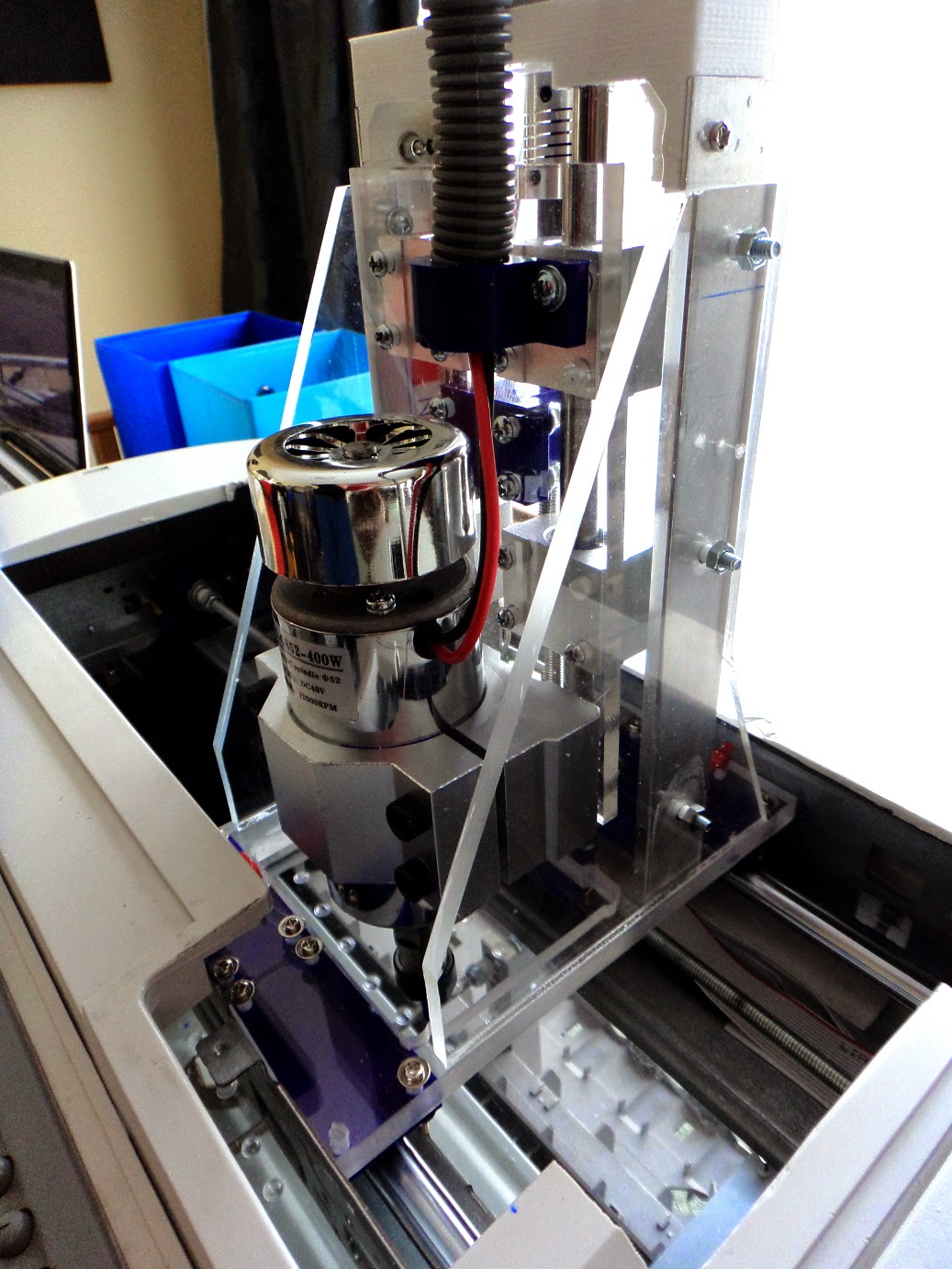 Here's a closer look at the new Y carrier and Z axis assembly.  The flexi tube clamp (for the spindle wiring), bearing mounts, top stepper mount and Z screw nut carrier (with anti-backlash) was all made on the 3D printer.

The screw rod is riding on a flanged bearing in the base plate, so the stepper and coupler is under no vertical load forces.

Now..before you gasp at the lack of fixtures attaching the side plates to the base plate...it's glued on.  I used Weldon 4, making sure the edges were clean and square, and the bond is surprisingly strong.  Since it's primarily dealing with vertical forces, it is stressed in a directly upwards direction.  I messed up on my first Z movement test and almost split the top mount..so I reckon the bond is plenty strong.  Time will tell, but I have a plan for if it all turns ugly.

I colour co-ordinated the mounts so I would know which one went where.  Nah!!...not really..I just ran out of the blue filament when I was partway through a printing session! :-) 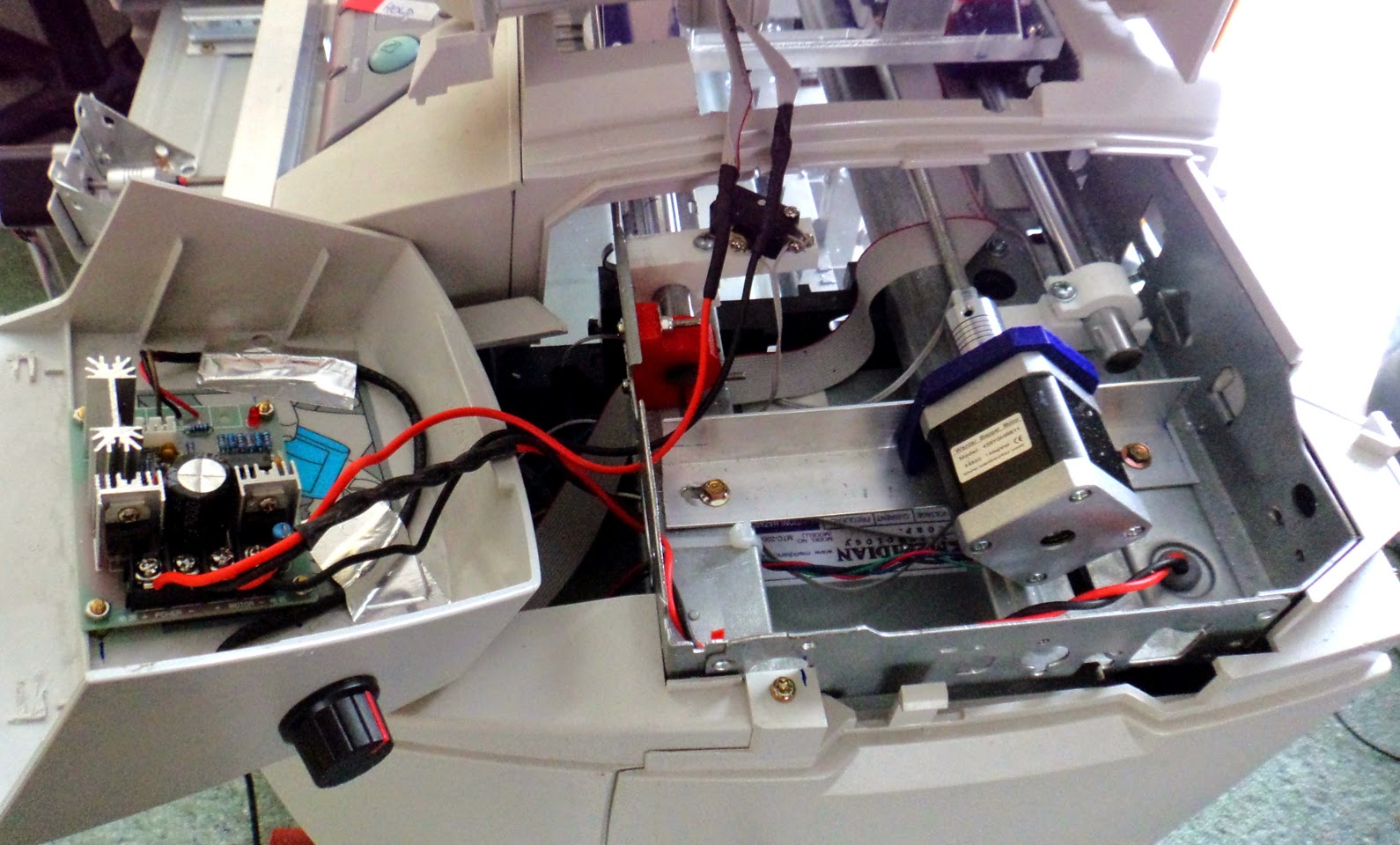 The old ink tank lid was an ideal place for the spindle speed controller, but required a removal of the potentiometer and wiring it back in so I could mount the pot through the side of the lid. 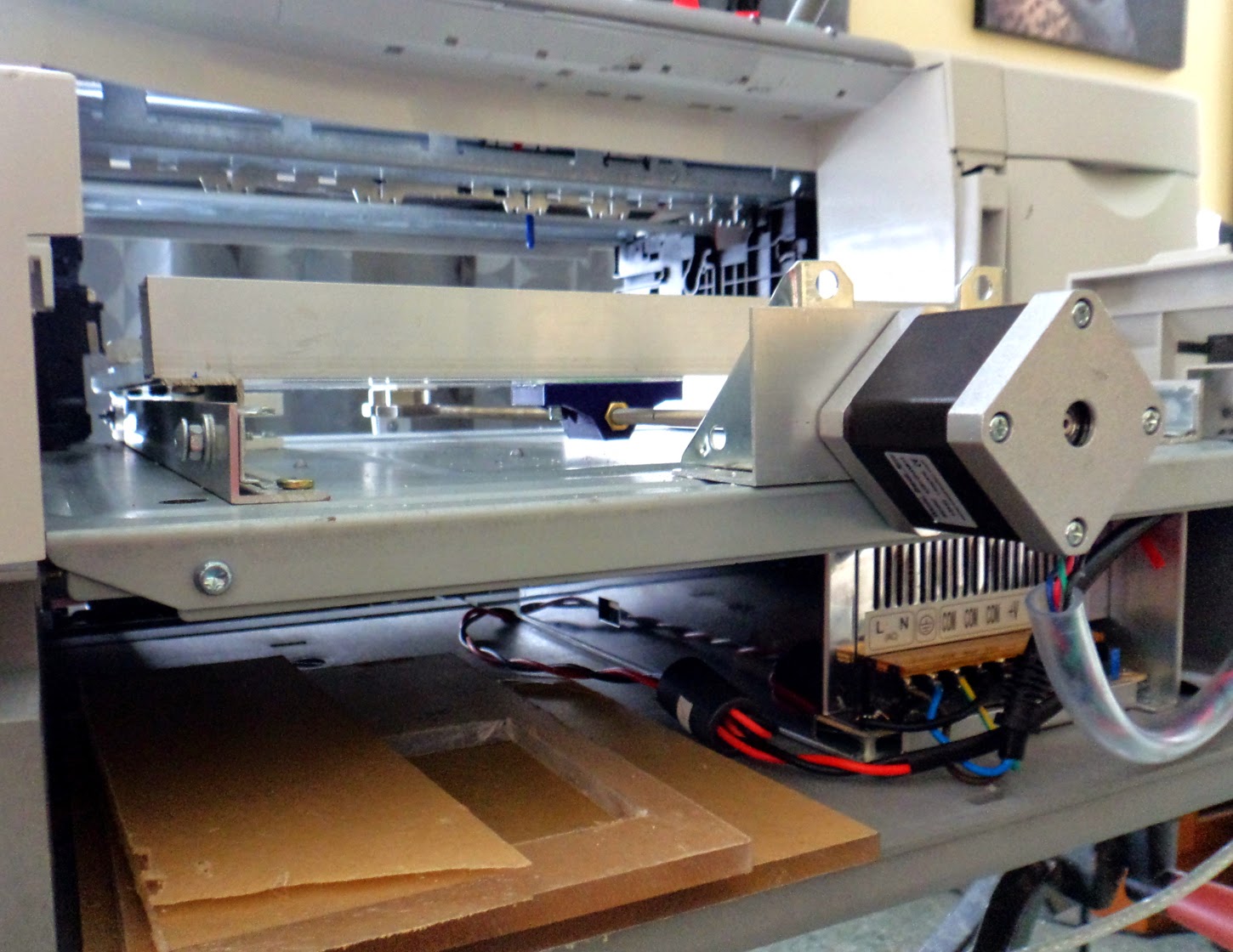 And the old paper tray cavity was just the right size for the 48v PSU for the spindle.

I did have a hell time with the endstop switch signal firing and causing a hard stop, even though the axis's (axii?..axisees?) were nowhere near the microswitches..but only if the spindle was running.  So obviously I was getting some line noise, possibly from the brushless motor.

I went and got some shielded twin-core cable for the switches, tested one...fail army!  So I took the 48v PSU out from where you see it and moved it away from the rest of it..viola!..no line noise and no false triggers.  So now it appears that something inside the PSU is creating a lot of noise.  A quick test of clipping a small jumper lead from one of the the PSU output posts common to the case...and problem went right away.  I'm not an electrician or electronics engineer, but I reckon that by earthing the case, I'm basically turning it into a shield.  Scares me to think what's going on inside that thing...but the fix works, and hasn't let the smoke out, so I'm happy.

So now I'm getting my head around G-Simple CAM program to make some g-code to chuck at it and test the beastie.  I did a test with manual commands via grbl controller..and it's already looking a meelion times better than the previous attempt.

Will upload a video to the tube once I have tested it..providing it doesn't all go horribly wrong.

[EDIT]
Some readers have asked for more detail about the new Z Axis assembly, so here's some Sketchup models to help explain what I did.
Note: Items in blue are the 3D printed parts, semi-transparent parts are the acrylic, and all others are standard hardware (bearings, rods, nuts and bolts, etc) 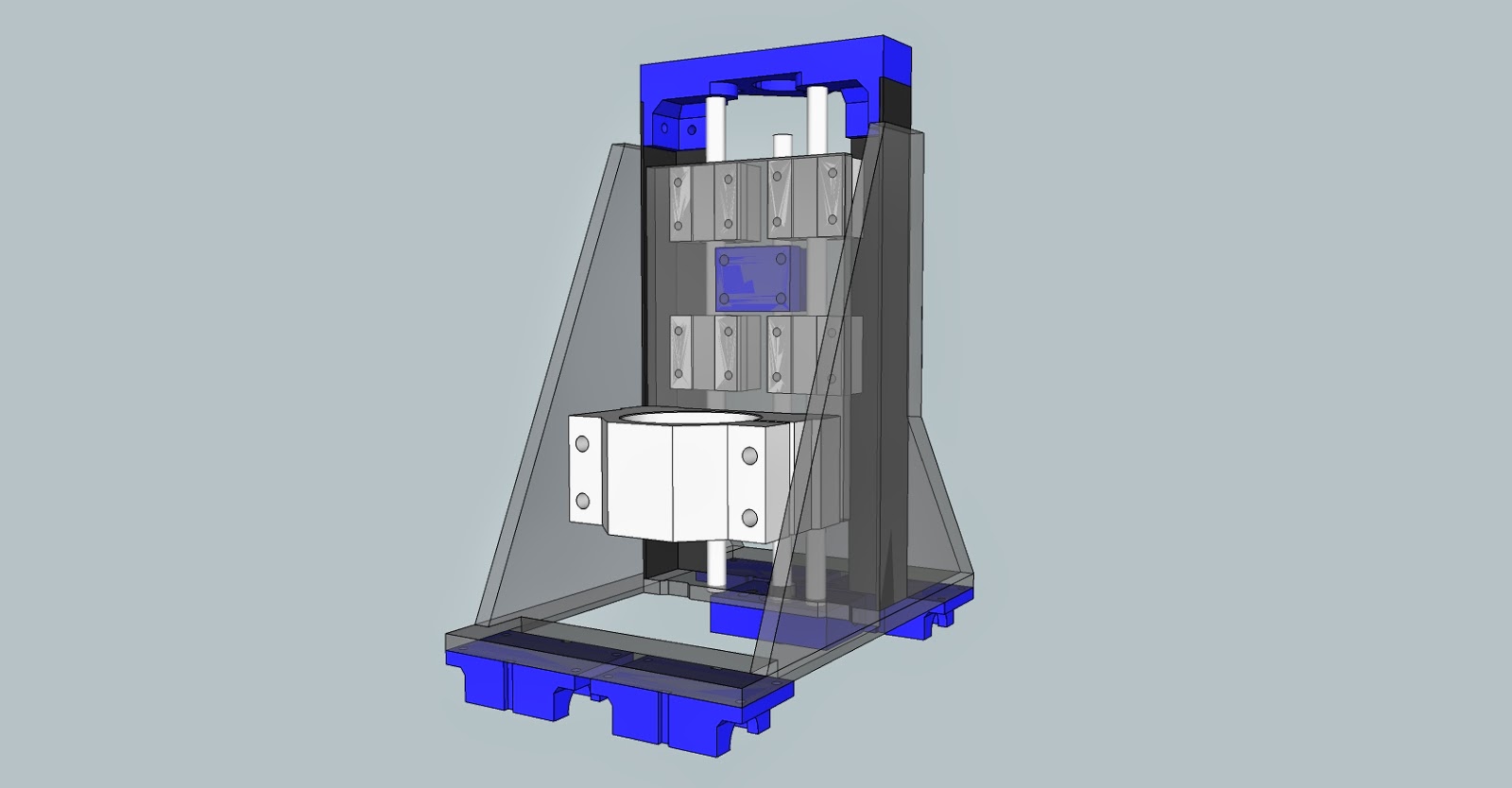 The side plates are glued to the base with Weldon #4 acrylic cement, and the top mount (which also acts as the Z axis stepper mount) is attached to 2 lengths of 25mm aluminium angle bolted to the inside of each side plate. 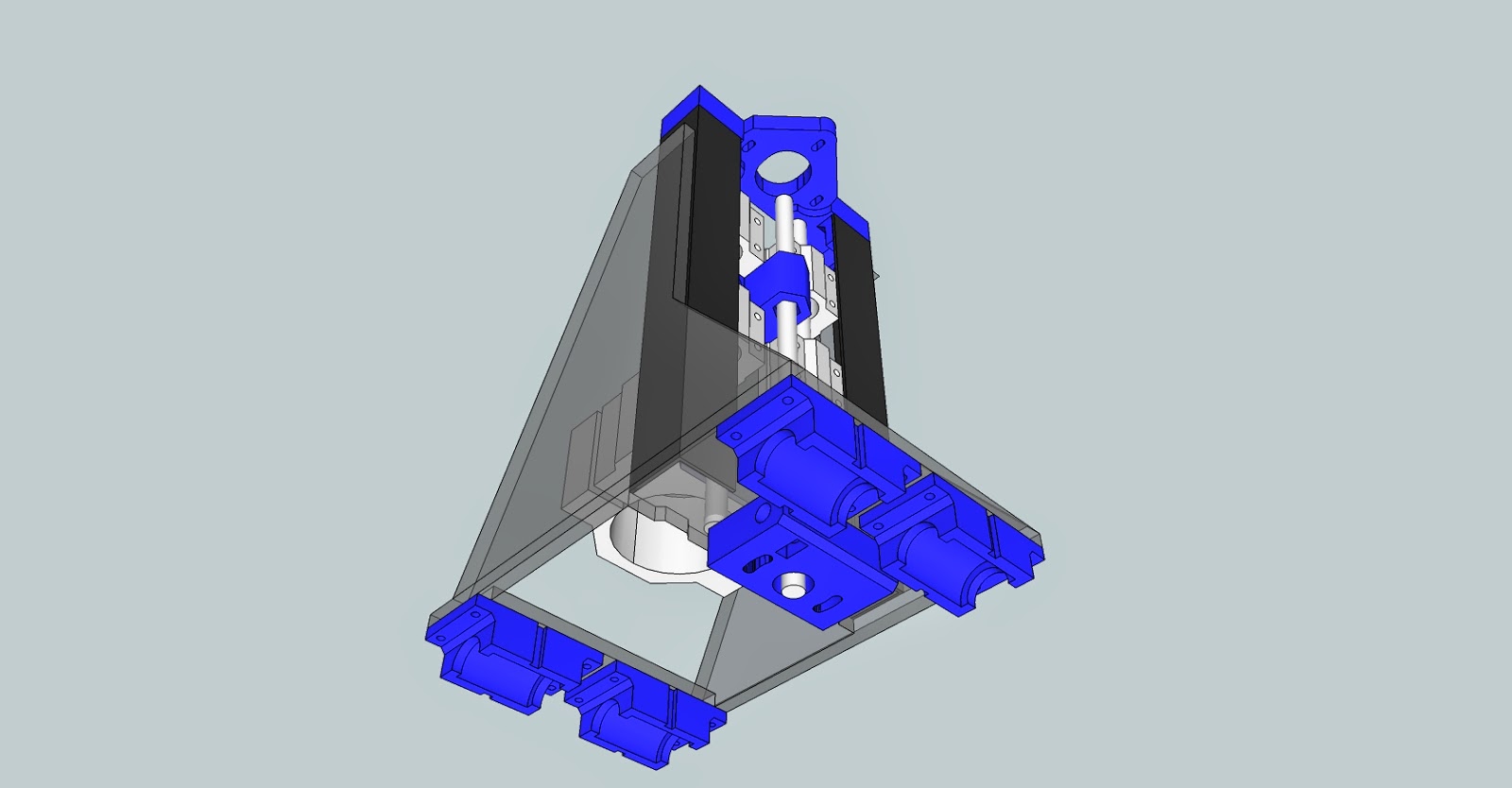 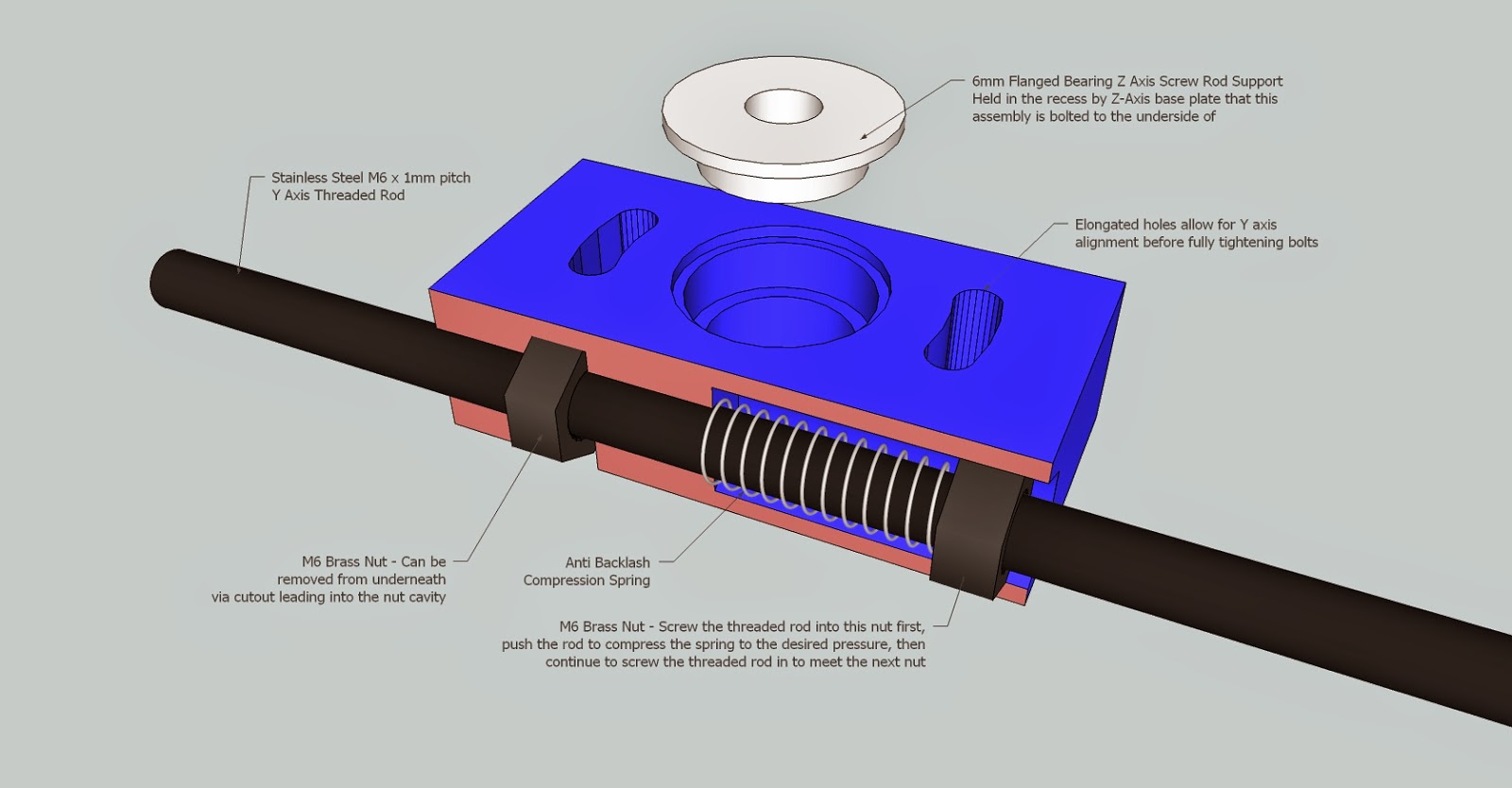 The 13mm linear bearing mounts and Y axis nut carrier are attached to the underside of the base plate.  The bearings are held in place by the snap fit of the mount recess, and also secured by zip ties that fit in the slots along the front and back faces of the mount.

Here is a close-up, sectional view of the Y axis nut carrier, which also incorporates an anti-backlash spring and Z axis screw rod lower support bearing.
Posted by SH at 22:14